In this post I’ll be demonstrating a few common algorithms using the Python language. I’m only covering a very small subset of popular algorithms because otherwise this would become a long and diluted list.

Instead I’m going to focus specifically on algorithms that I find useful and are important to know and understand:

But before we get into it... time for some self-promotion 🙊

Want to be up and running quickly with Python? Get started here with my book
"Python for Programmers"!

Three out of the four ‘search’ algorithms listed above will be implemented around a graph data struture. Graphs appear everywhere in life. For example, your Facebook list of friends, mutual friends, and extended friends (i.e. friends of your friends who you don’t know) is a perfect example of a ‘graph’.

Graphs can also be ‘weighted’, so they can indicate that a relationship between two nodes within the graph are possibly stronger than another connection, and is typically used in road maps for determining the quickest path to a particular node (we’ll come back to this later when reviewing Dijkstra’s Algorithm).

That short list actually defines two distinct processes: a ‘break up into partitions’ step followed by a ‘merge’ step. The merge pseudo-steps could be further broken down to look something like the following:

The above merge steps process is carried out against each recursively sorted set of partitions, and is done until we reach a final ‘sorted’ list.

Below is an implementation of this sorting algorithm:

Note: notice the ‘less’ and ‘greater’ lists are passed recursively back through the quick sort function.

Below is an implementation of this sorting algorithm:

Difference between Merge and Quick sort

Both merge sort and quick sort are ‘divide and conquer’ algorithms, e.g. they divide a problem up into two and then process the individual partitions, and will keep dividing up the problem for as a long as it can.

So when considering which you should use (i.e. which is better?) you’ll find merge sort is more performant because its particular implementation is more efficient with the operations it carries out.

Specifically, the difference between merge sort and quick sort is that with quick sort you’ll loop over the collection twice in order to create two partitions, but remember that doing so doesn’t mean the partitions are sorted.

These quick sort partitions are not sorted until the recursive calls end up with a small enough partition (length of 1) where the left and right partitions can be analyzed, joined and therefore considered ‘sorted’.

Compare that to merge sort which recursively creates multiple partitions (all the way down to the smallest possible partition) before it then recursively rolls back up the execution stack and attempts to sort each of the partitions along the way.

Additionally, with a merge sort it’s possible to parallelize the data over multiple processes, while quick sort requires data to be processed within a single process.

All that said, the implementation of the algorithms can be tweaked as needed to produce better or worst performance. For example, quick sort could be modified to use another algorithm called intro sort which is a mix of quick sort, insertion sort, and heapsort, that’s worst-case O(n log(n)) but retains the speed of quick sort in most cases.

So with a collection like 25, 17, 85, 94, 32, 79, after the first iteration we would have created ‘numbered’ buckets that looked something like the following:

The most popular algorithm (by far) for searching a value in a sorted list is ‘binary search’. The reason for its popularity is that it provides logarithmic performance (on average) for access, search, insertion and deletion operations.

What this ultimately achieves is shortening the search ‘window’ of items by half each time (that’s the logarithmic part). So if you have a list of 1000 elements, then we can say it’ll take a maximum of ten operations to find the number you’re looking for (that’s: log 2(10) == 2^10 == 1024).

Below is an implementation of this popular search algorithm:

Note: you could swap round((start + stop) / 2) for (start + stop) // 2 which uses Python’s // floor division operator, but I typically opt for the clarity of using the explicit round function.

A BFS (breadth first search) is an algorithm that searches a data structure from either a root node or some arbitrary starting point. It does this by exploring all the neighbouring nodes, before moving onto other connected nodes.

The following graph represents a group of people. Some people know each other (e.g. both Alice and Bob know each other), where as other people don’t (e.g. Dave knows Ethan, but Ethan knows no one else in this group). 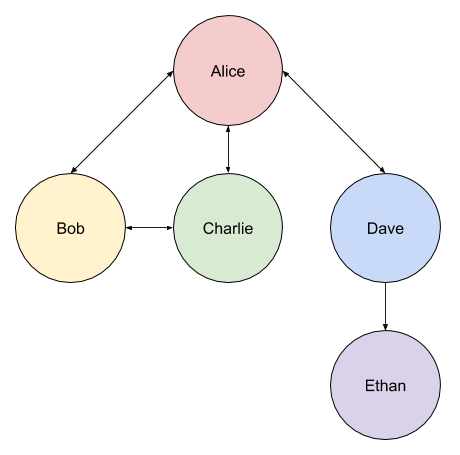 The time complexity of this algorithm will be, at worst, O(V+E).

Note: in the case of dealing with a graph, V = vertex (a node in the graph) and E = edge (the line between nodes), the worst case scenario will mean we have to explore every edge and node.

Below is our example implementation of the BFS algorithm:

Note: an alternative implementation might use Python’s set data structure to avoid having to filter already searched people.

Let’s take a look at the first run of this program:

From that output we can see that we started very conveniently at the ‘Dave’ node. Dave’s adjacent nodes are Alice and Ethan. Due to the order of the nodes in the queue we attempt to process Alice next. Then we check the next node (Ethan) and find what we’re looking for.

Now consider a second run which has a different starting point (notice the difference in the number of operations):

Note: I’ve used a dict to represent a graph, which helped to make the code simpler to understand. A different data structure (e.g. a directed tree) would require a different implementation of the algorithm. Remember, the basic premise is to search a graph node’s adjacent fields, and then their adjacent nodes. 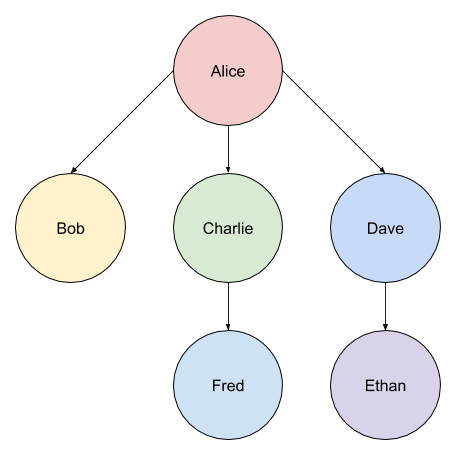 A DFS (depth first search) is an algorithm that searches a data structure (such as a tree, or a graph) from its root node. It searches downwards through each child node until there are no more children.

We’ll use the DFS (depth first search) algorithm to locate the node ‘Ethan’.

Notice how if don’t find a match for what we’re looking for, then we backtrack up to the top of the tree and start again at the root node’s next child node.

The time complexity of this algorithm will be, at worst, O(V+E) (as noted with Breath First Search, this means we could end up hitting every single node and edge in the data struture).

Note: this example uses a traditional tree data structure instead of a graph to represent the underlying data to be searched.

Below is our example implementation of the DFS algorithm:

Note: in our example we use a simple tree data structure to represent the data to be searched. Our implementation is designed to work with that structure. So, for example, if we had multiple children per node (left and right child nodes), then we would need to account for the backtrack to the relevant child right node near the top of the tree.

Let’s take a look at the output of this program:

So from this output we can see we started at Alice, and first checked Bob but because Bob has no children we moved back up to Charlie. From Charlie we go down to Fred but as there’s no more children we move back up to Dave. Finally we check Dave’s children to find Ethan.

When to choose BFS vs DFS?

Generally BFS is better when dealing with relationships across fields, where as DFS is better suited to tree hierarchies.

That said, below is a short list of things to consider when opting for either a BFS or DFS:

Note: the data strutures used (including the implementation of your algorithm) can also contribute to your decision.

Ultimately, it all depends.

If you have an unsorted collection, then your only option for searching is a linear time complexity O(n). To improve that performance we would need to first sort the collection so we could use a binary search on it.

Another potential option is to run a linear search across multiple CPU cores so you’re effectively parallelizing the processing. It’s still O(n) linear time complexity, but the perceived time would be shorter (depending on the restructuring of the collection split chunks).

The Dijkstra algorithm tells you the quickest path from A to B within a weighted graph. 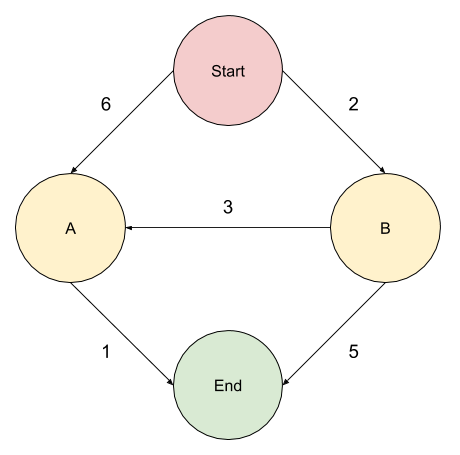 In the above graph we have a few options:

Note: as you can see, the route that visually looks longer is actually quicker when considering the weighted nature of the graph.

The time complexity of this algorithm will be, at worst, O(V+E) (as noted with Breath First Search and Depth First Search, this means we could end up hitting every single node and edge in the data struture).

The algorithm can be broken down into the following pseudo-steps (it’s important to note that in this implementation we calculate the route in reverse):

These steps are very specific to our graph, so if your data structure is different, then the implementation of the algorithm will need to change to reflect those differences. Regardless this should be a nice introduction to the fundamental properties of the algorithm.

Without further ado, below is an example implementation of the Dijkstra’s algorithm: